No, I Won’t Stop “Sounding Angry”

When a friend of mine asked me to review Angry Indian Goddesses, I was quite apprehensive. I don’t have what is generally considered “good taste” in films. I’m a little ashamed to admit that my films of choice are cheesy chick flicks that end with confessions of love and kisses in the snow. However, I was instantly intrigued by the trailer of AIG- I loved the soundtrack, and being Women’s Studies students, my friends and I HAD to watch this movie that called itself “India’s first female buddy film”.

I didn’t know what to expect. I knew it wasn’t going to be without problems-and there were a few- slightly clichéd characters, a rather dramatic second half and a somewhat utopian conclusion.  Either way, I’m not in a position to review the film because I launched into a full on sob-fest ten minutes in. I’m not sure what it was. I saw myself in some of the characters- laughing, sipping cocktails, and talking about boys-and each going through her own existential crisis- something I have on a pretty much daily basis. What am I doing with my life? Do I love what I do? What if my career goes nowhere…it’s constant and relentless.

I think my tears were those of sadness, confusion, and in part, a strange kind of happiness-it felt personally liberating to see women being so unabashedly themselves. So unapologetically brash. Checking out that hot shirtless neighbour washing the Ambassador (a scene I particularly enjoyed). Getting sloshed and talking about men, sex and love. Shedding inhibitions and just, dancing. Barging into the “men’s restroom”- because when you really, really need to pee, gender doesn’t matter (as it shouldn’t in most situations). I loved how these women didn’t have to be “masculine” (Rani Mukherjee in Mardaani, anyone?) in order to be strong. Whether it was the typical upper class Delhi housewife, the struggling musician with feathers in her hair, or the aspiring actress- each was tough in her unique way.

While I was reading up a little on the movie for this post, I stumbled upon some predictable reactions- MRAs .i.e Men’s Rights Activists (yes, apparently that’s a thing now) going on about how the film advocates “reverse sexism” (LOL), how the definition of equality doesn’t imply women going into men’s restrooms, how the solution to men harassing women isn’t women leching at hot shirtless men.

I don’t want to get into a detailed rant with regard to this but can we please stop acting like women checking out men are the same as men harassing women? I’d like any man reading this to think back to the last time a woman on the street made you uncomfortable- when was the last time a woman on the street flashed you? Touched you without your consent? Or maybe touched herself while sitting next to you in an auto? Called you a pataka/ phuljhari/ asked you to perform sexual acts on her while you were walking down the street? Yep. Didn’t think so. However, for a lot of women, our first introduction (?) to male genitalia was not in our biology books- it was that creepy man at the bus stop, outside our schools, outside our homes who decided we had to watch him unzip whether we liked it or not.

I read somewhere that director Pan Nalin is receiving death threats for the “objectionable content” in this movie. I’m sadly not surprised. The problem, or rather the “objectionable content” in this film isn’t those women going into male restrooms- it’s what that action represents- that these women are behaving in a way that is not expected of them, in a way that defies our conditioning. Conditioning that tells us we need to apologize for taking up space, for speaking loudly, for dancing uninhibitedly, for being angry, for being ourselves. Well, enough of that. It’s time for women to be absolutely enraged- so maybe skip Tamasha and Prem Ratan Dhan Payo this week, and catch a show of Angry Indian Goddesses- you won’t regret it. 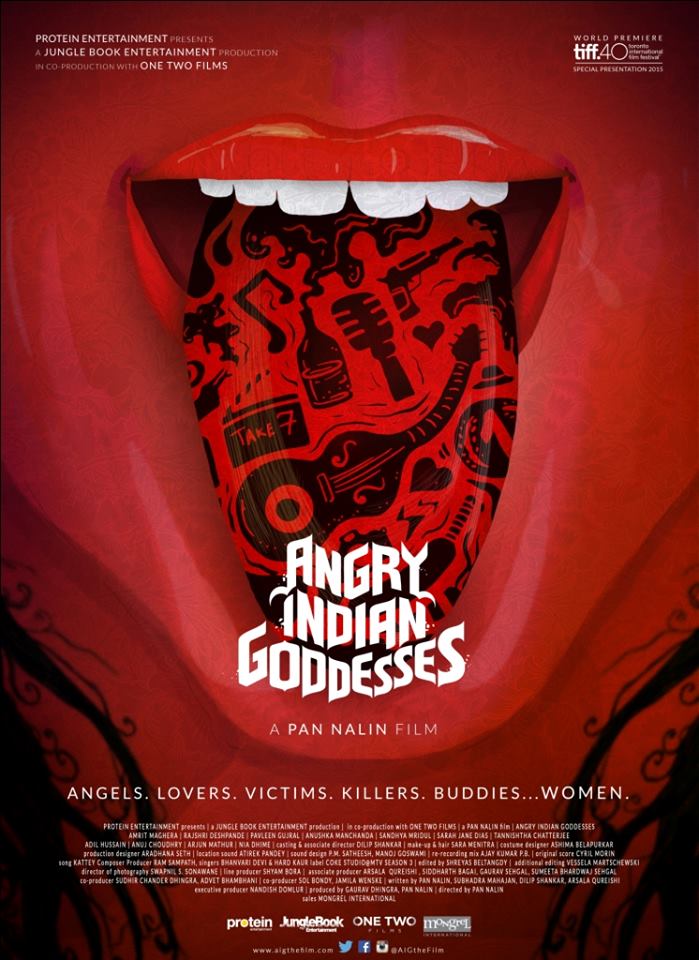