The Politics of a Stare

About a week ago I made the mistake of visiting Charminar- my friends and I had been quite excited-we couldn’t wait to shop for trinkets and try the much talked about biryani and kababs. However, I soon regretted it. The minute we stepped out of the cab, it started pouring, and the men started harassing.

It’s not like I didn’t anticipate it. We’d been told to dress “appropriately” since it was a conservative area (as if dressing conservatively ever stopped a woman from being harassed). We followed the rules, dressed in patialas, kurtas, with duppattas. Surprise, surprise, we still got stared at, and leched at. Apparently we were “byudiful, gorjuz girls enjoying the rain”. Thank you for that, creepy man on bike, we definitely needed your vaildation to feel attractive.

Being conditioned to ignore such things, we walked to a restaurant to pick up some food, where we were told by one of the waiters that we should go upstairs to the air conditioned area, because you know, it would be more “comfortable”. It felt like an insult to my intelligence, because even a cursory glance around the place made it obvious why we were being shuffled off upstairs. The ground floor was fully occupied by men who were staring at the five of us as though we’d just walked out of a UFO.

Cut to a few days later, in the midst of a heated discussion in class that had turned to voyeurism, personal space, and sexuality, a classmate turned to me and asked what I thought about men who stare at women. To be honest, I wasn’t sure I had an articulate answer, so I asked where exactly this question came from- turns out, a (male) college professor had told her, that women shouldn’t get offended when men stare at us, because they are merely appreciating our beauty. She seemed genuinely confused, as though it was wrong to get upset when a man stares at you. I was so angry I could barely get any words out. I hope I can answer her question better through this post.

In class we were once told that everything is political- every interaction is an expression of power inequalities. Street harassment is political, and the beginning in a continuum of sexual assault. It is not “catcalling”, it is not “eve teasing”, it is harassment, plain and simple, an instrument to assert male dominance over our bodies and spaces.

I myself have never had the courage to directly confront a harasser. I don’t know if I ever will. When I look back at the multiple times I have been harassed in some way or the other, I think of all the things I could have done and said. But the reality is, when it happens. most of the time you choose to ignore it, or you freeze up. I don’t have any solutions or advice to give. I just want to tell my classmate, and  every other woman who has been asked to “enjoy” harassment by an utterly clueless and insensitive man- that in a world where you will probably be violated in some way or the other multiple times over the course of your life, where you don’t have the right to your own body, don’t let anyone take away your right to get absolutely bloody furious-because, in the words of Leymah Gbowee, “it’s time for women to stop being politely angry”. 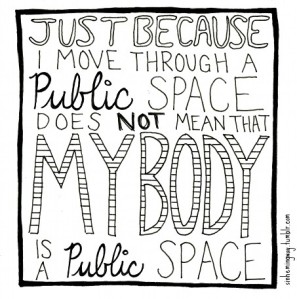